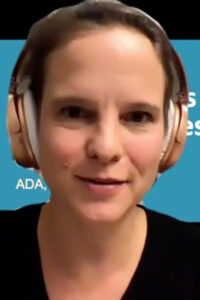 The symposium, Low-Carb Diets in Pediatric Type 1 Diabetes—Pros and Cons, can be viewed by registered meeting attendees at ADA2020.org through September 10, 2020. If you haven’t registered for the Virtual 80th Scientific Sessions, register today to access all of the valuable meeting content.

Dr. Lennerz defined a low-carb diet as less than 50 grams of carbohydrates per day, or less than 10% of daily calories from carbohydrates. Some diets may also limit protein to achieve ketosis.

“As [low-carb diets] gain in popularity in the general population, they also gain interest in the diabetes community,” said. Dr. Lennerz, who described several reasons why low-carb diets appeal to some diabetes patients—beginning with glycemic variability. “Postprandial glycemic variability is important because it contributes significantly to overall glycemic control and is an independent cardiovascular risk factor,” she said. “Postprandial glycemic variability is largely caused by carbohydrate intake. In addition, children and adults with type 1 diabetes are at risk of [being] overweight and metabolic syndrome. We know that higher insulin doses are associated with weight gain, potentially due to extra carbohydrate intake to treat hypoglycemia, or because of anabolic insulin effects.”

Dr. Lennerz reviewed survey data from a group that promotes a very low-carb diet based on the book Dr. Bernstein’s Diabetes Solution. Dr. Lennerz’s team conducted an online survey of 316 patients with physician participation to corroborate the data. Of the participants, 42% were children with an average daily carbohydrate intake of 16 grams a day. Participants had been on a low-carb diet an average of 2.2 years.

“The most striking finding here is the average A1C was 5.67%, which is really unprecedented in type 1 diabetes,” she said. “Moreover, almost all of the patients were able to achieve their glycemic target as recommended by the ADA. They had low glycemic variability and they had a fairly low insulin requirement.”

In her rebuttal, Dr. Smart said a low-carb diet is not necessary to achieve good glycemic control and highlighted the risks associated with these diets.

Another concern, she said, is the absolute focus on carbohydrate amount.

“In this model, the message is all carbs are the same,” she said. “An apple is not a doughnut. These diets do not consider the impact of carb type on glycemia. In a study we published, we found the type of carb has a significant impact on glucose level. In addition, fat and protein also cause high blood glucose levels.”

“It’s possible to match insulin to glycemic rises,” Dr. Smart said. “Glycemic targets are achievable with a usual carb diet. The key is to educate parents to establish habits children can use throughout their lives.”

To demonstrate this, Dr. Smart presented results from a paper her team published in 2019 that looked at dietary intake and eating patterns of 22 children in her clinic.

“Rather than singling out carbohydrate amount as being the key factor, what we need to do is look at what families are doing to achieve targets,” she continued. “We need to look at behaviors—frequent monitoring with correction, multiple doses per day with preprandial insulin, and mealtime structure. We need to consider all macro nutrients.” Dr. Gallagher, a pediatric psychologist at Texas Children’s Hospital and Assistant Professor at Baylor College of Medicine, said there’s limited published data directly examining the psychological and behavioral benefits of carb-restrictive diets in youth with type 1 diabetes. However, these diets may offer mental health benefits as a result of reduced glycemic variability, she said. “Higher dietary restraint in type 1 is linked to higher diabetes distress, depressive symptoms, body image and weight concerns, lower self-esteem, and lower self-efficacy,” she said. “In addition, type 1 diabetes is a risk factor for disordered eating, as is dietary restriction. So the combination of the two needs to be considered carefully.”

“Anorexia nervosa has the highest mortality rate of any psychiatric condition,” she said. “When you couple that with the implications of type 1 diabetes, we’re talking about a pretty serious condition.”

Dr. Aarnio-Peterson said youth with type 1 diabetes need to understand the nuance between restraint and dietary restriction. She reviewed data indicating that more restrictive dietary regimens, such as low-carb diets, were more likely to lead to dietary restraint and then to disordered eating behaviors.